We are all trying to figure out what all of this is… including doctors. 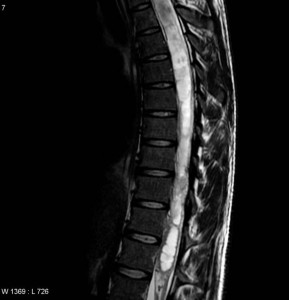 Syringomyelia /sɪˌrɪŋɡɵmaɪˈiːliə/ is a generic term referring to a disease in which a cyst or cavity forms within the spinal cord. This cyst, called a syrinx, can expand and elongate over time, destroying the spinal cord. The damage may result in pain, paralysis, weakness,[1] and stiffness in the back, shoulders, and extremities. Syringomyelia may also cause a loss of the ability to feel extremes of hot or cold, especially in the hands. The disorder generally leads to a cape-like loss of pain and temperature sensation along the back and arms. Each patient experiences a different combination of symptoms. These symptoms typically vary depending on the extent and, often more critically, to the location of the syrinx within the spinal cord.

Syringomyelia has a prevalence estimated at 8.4 cases per 100,000 people,[2] with symptoms usually beginning in young adulthood. Signs of the disorder tend to develop slowly, although sudden onset may occur with coughing, straining, or myelopathy.

What is a Chiari Malformation? 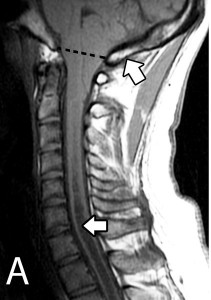 Chiari malformation, also known as Arnold–Chiari malformation, is a condition affecting the brain. It consists of a downward displacement of the cerebellar tonsils through the foramen magnum (the opening at the base of the skull), sometimes causing non-communicating hydrocephalus[1] as a result of obstruction of cerebrospinal fluid (CSF) outflow.[2] The cerebrospinal fluid outflow is caused by phase difference in outflow and influx of blood in the vasculature of the brain. It can cause headaches, fatigue, muscle weakness, difficulty swallowing, dizziness, nausea, tinnitus, impaired coordination, and, in severe cases, paralysis.[3]

Because your love is better than life, my lips will glorify you. I will praise you as long as I live, and in your name I will lift up my hands.
Psalm 63:3-4

SyrinGoWhat.com © 2015 | All content from this site cannot be reproduced, rewritten or used in any other way without permission (this excludes the sharing of unedited versions on social media). You can request permission using our contact form - http://syringowhat.com/contact-us